0
was successfully added to your cart.

Winbee farms also sell exotic birds. Our animals require high maintenance and that’s exactly how we keep our exotic birds pampered at our farms. Following are the birds we sell for keeping as pets:

Peacocks are a beautiful bird known for its pretty feathers and spotted tail displays. It’s a bird with its origins from Asia. Peacocks have varied species and terrestrial feeders. They lay eggs on the trees and roams around on the floor. These omnivore birds prefer eating plants parts, seed heads, flower petals, insects, amphibians and reptiles. They usually look for food in leaf litter when in the wild. They usually look for food at dusk early morning.  These easy going birds and are not picky when it comes to food. They eat anything and everything that fits their beak and they can digest. They like to be in the shade during the hottest part of the day and stay up in the trees for security purpose. 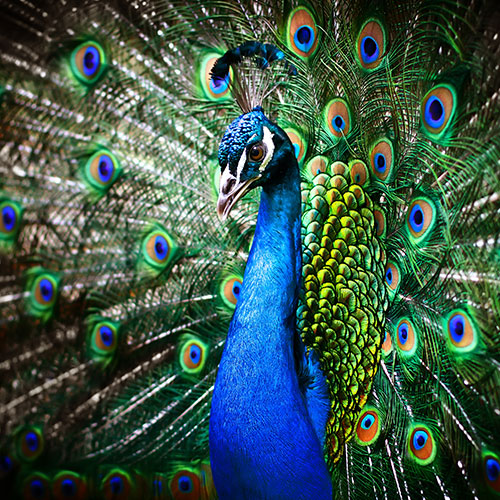 The emu (Dromaius novaehollandiae) is the second-largest living bird by height, after its ratite relative, the ostrich. It is endemic to Australia where it is the largest native bird and the only extant member of the genus Dromaius. The emu’s range covers most of mainland Australia, but the Tasmanian emu and King Island emu subspecies became extinct after the European settlement of Australia in 1788. The bird is sufficiently common for it to be rated as a least-concern species by the International Union for Conservation of Nature. 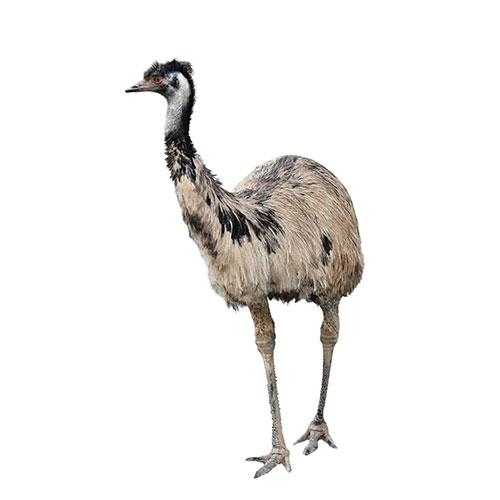 These are brilliantly colored birds and very good at camouflaging while they walk on grass. All the breeds of pheasants are like dwell on ground and in case of danger they tend to flee on foot. They can only fly in short and fast bursts. Their females live only on ground and look for places that are well camouflaged. Pheasants can be separated in to two categories. Pheasants are very secretive birds and are alarmed quickly. They are not vocal until their breeding season approaches. Pheasants are same in nature as a peafowl, but are wilder in comparison. Their males can be aggressive and can attack with their sharp spurs. Since the males especially the Reeves specie is ill tempered and is not recommended to the beginners Pheasants are hardy birds and live up to 25 years. They can survive in harsh weather conditions as well. Since pheasants are omnivores, it’s easy to feed them. They eat anything, from fruits to vegetables to insects, grasshoppers, slugs, snails and small lizards. If pheasants are not able to get adequate protein it may increase their cannibalistic tendencies. Since they are secretive they require bushes and brush for nesting. They are not good at sitiing on their eggs, hence incubation is required for hatching. 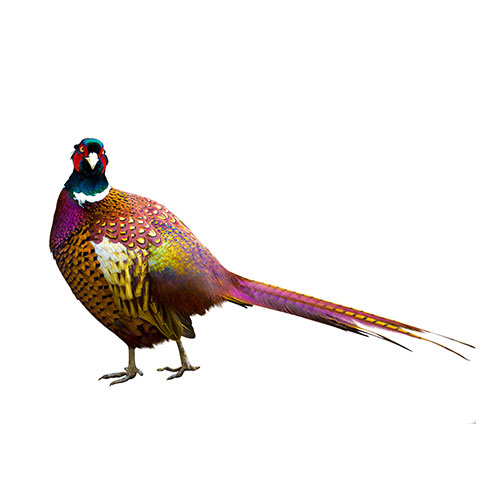 The ostrich or common ostrich is either one or two species of large flightless birds native to Africa, the only living member of the genus Struthio, which is in the ratite family. In 2014, the Somali ostrich was recognized as a distinct species. Ostriches mainly eat plant matter, but they also eat insects. The plant matter consists of seeds, shrubs, grass, fruits and flowers while the insects they eat include locusts. Ostriches do not have teeth, and so cannot grind food as mammals do. Instead, they swallow pebbles. An adult ostrich carries about 1 kilogram (2.2 lb) of stones in its gizzard, a special sac just before the stomach. 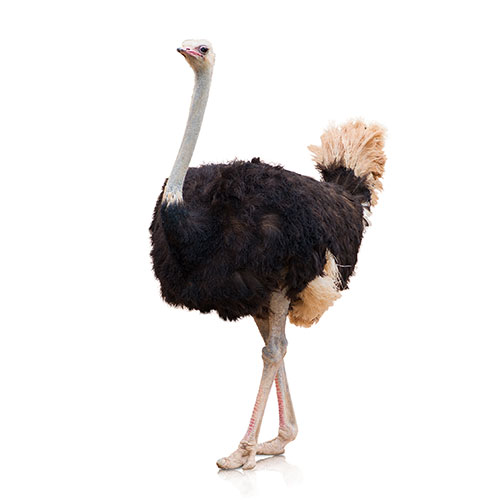 Guinea fowl birds are from the family Numididae. They are mostly found in Africa and are ranked among the oldest birds. They usually feed on beetles, locusts, ticks and spiders, flies, wasps, termites, garden ants, snails. Grubs, and cutworms. They roam they like to roam around freely and serve as best pest controls pets. These birds useful, this why everyone who keeps them has a different reason to keep them on farms or as pets. Guineas spend most of their day foraging, they strongly believe in team work and hence work as one. If they find something special to feed on such as a rodent or a small snake they circle around it and eat together. They remain in constant conversation with each other while the move above pecking and eating whatever comes their way. However, are loud birds and tend to become scared if the predator comes or some stranger approaches. Usually they keep to themselves but sometimes they can turn in to bullies for other birds, so keeping a genuine is only a good idea if you do not have any other birds. 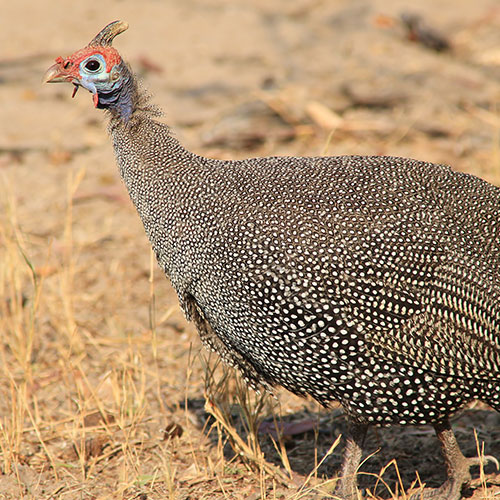 It seems that they derived this image from the simile in the Gospels, combining it with the symbol of the olive branch, which had been used to represent peace by the Greeks and Romans. The dove and olive branch also appeared in Christian images of Noah’s ark. 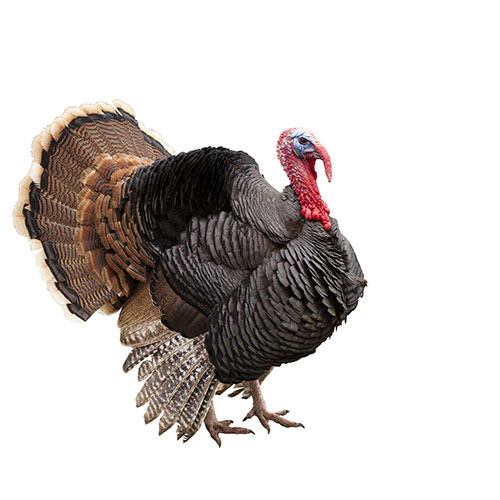 Quails are goofy little birds that like to run around in the sand and nestle quietly in the corners. Usually most birds chose to stay in the upper portion or middle portion of the cage, Quails prefer to keep their feet on the ground. Since quails love to be in the sand, it is always a better option to provide them with larger space rather confine them to cages only. Quails likes feeding on parrot food but they will love if the food comprises of worms, insects, vegetables especially greens, seeding grass and pre-mix soft foods. Quails require a lot of water so while giving them water you can place a large bowl with pebbles to avoid drowning. 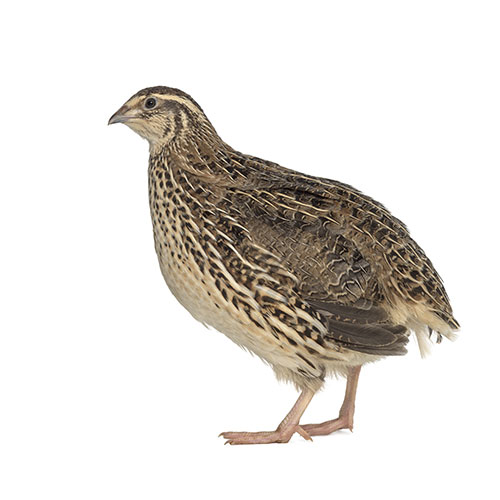 Turkeys are kept both as pets and for eating their meat as well. There are different varieties of turkeys, one can fly the other cannot. The ones that can fly are the wild turkeys, they are smaller in size whereas the domesticated turkeys are much larger and cannot fly. It is the domesticated turkey that is preferred for it meat for being meatier than the latter. Domestic turkeys are slower in comparison. Male turkeys gobble while female turkeys make sounds resembling a clucking sound. Although, turkeys can be kept in an enclosed area but they are happier if the get a bigger place where they can roam around. Wild turkeys can fly so it is not a good option to keep them without cages. Turkeys feed on wild nuts, gapes, berries, grass, acorns, leaves, poison ivy berries, honey suckle berries etc. However, they should be fed with pellets. Turkeys are a little messy hence an everyday clean-up is required, but turkeys take care of their grooming themselves.